James Kidd’s short story Salt, mentioned in NewPage’s review of Issue 6 by Aran Singh, is a surreal flash fiction beginning with the line: “You will soon learn that dying in the desert is not as romantic as you once thought.”

When asked about both the process of this particular story and others, James Kidd had this to say:

“The idea for this story came about from a challenge. Two friends and I decided to write something, either a poem or a short story, the only rule being that we had to include five words:

We had a week to write our respective pieces, and of course I forgot about it until twenty minutes before we were scheduled to meet. I had a few ideas drifting through my head before then, and just lost my mind for a little bit, writing out these two pages in one sitting.” 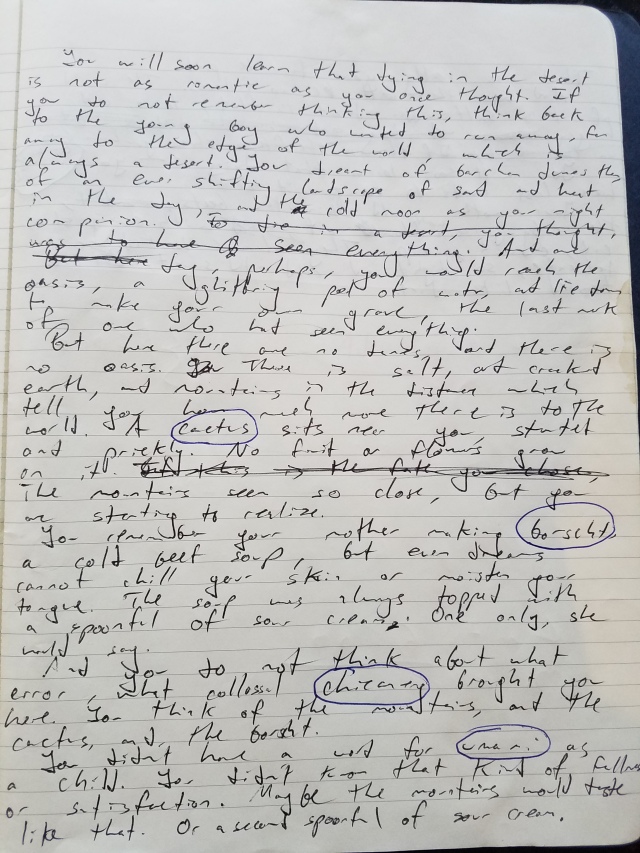 Describing his editing process for this story:

“It took a few months before I finally arrived at the finished piece, which was made all the more difficult because I was attached to the story behind the story: the words we had mandated for our little challenge (which I lost. Another friend fired a coffee mug and stamped the words into it, because she’s brilliant).

The only words that stayed were cactus and borscht, and that’s fine, I think.” 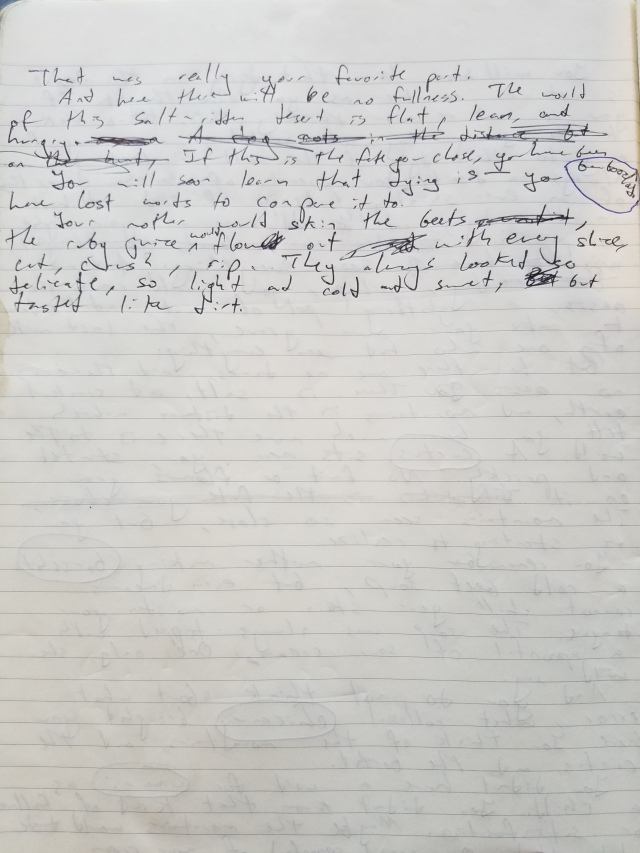 “I tend to compose a first draft in a notebook. The notebooks I’m using now are those paper bound Moleskines-you get three in a pack for $17.95, the price of one of their usual leather-bound ones. In a pinch, restaurant ticket books work well too.

Anyway, if I start something on my laptop, the delete button is far too tempting: Nothing seems good enough to me at first, so I don’t get anything done. On paper, however, I try not to give myself time to second-guess the work. The words just flow out, and if I do have to edit as I write, I try to only cross out things. I can always reuse lines that way.

“On paper, however, I try not to give myself time to second-guess the work.”

Of course, if I want anyone to read the manic scribblings I’ve just made, I have to transcribe it to the computer. This offers me a chance to get a second draft out of the way. I immediately cut sentences that don’t work, or words that I know I was too precious, too self-aware with.

One of my most frustrating tendencies is that in that second draft, I can sometimes become too invested with finding a new way to write something. Trusting the first draft, or at least my general instincts within that draft, is something I’ve learned that I need to do more often.”